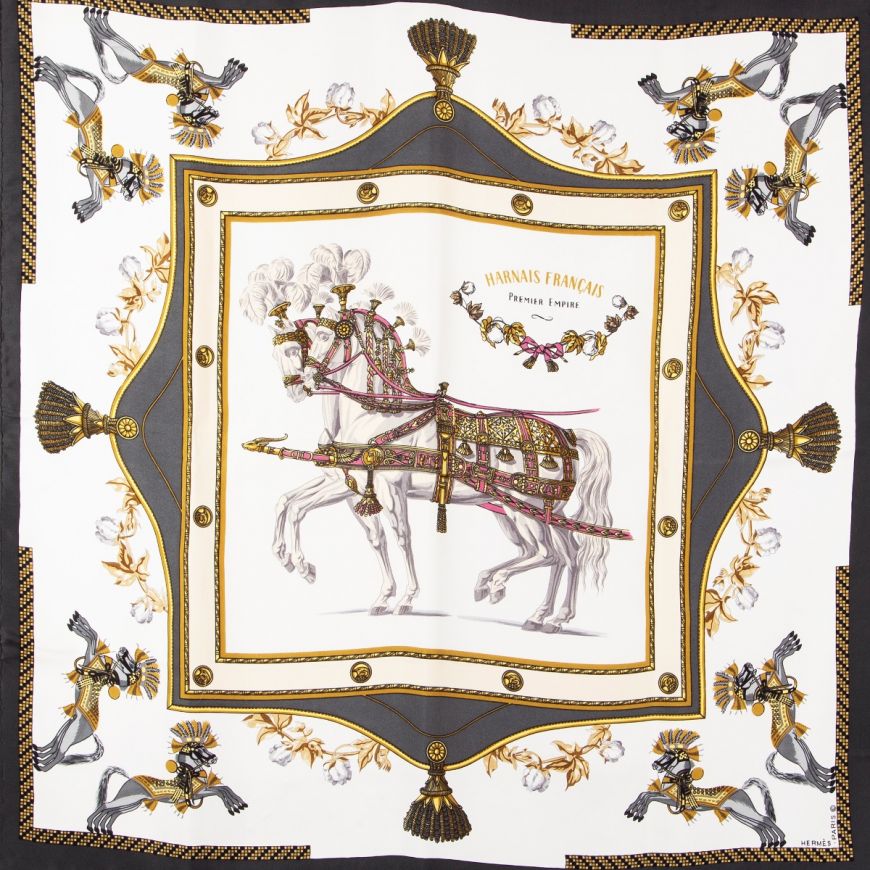 Hermes History is French World Fashion At Its Best

Hermes, Paris, and Vogue are forever synonymous in global fashion-wear. The Hermes fashion house hosts runway fashion shows featuring their seasonal collections. Sometimes referred to as Hermes of Paris or simply Hermes, this French luxury fashion designer is one of the most valuable brands in the fashion industry. Hermes is known for its undefiable craftsmanship, perfect detailing, and superior quality that is the best in the world.

The Hermes family tradition began in Paris around 1837 and where their corporate office remains today. Thierry Hermes started creating products for the championship riding industry by making coveted bridles, saddles, and other top-notch leather riding gear. Specializing in leather goods and accessories Hermes introduced their luxury silk scarves in 1937.

There Is No Anonymity Here

The iconic logo of Hermes remains today as it did a hundred years ago, its duc-carriage-with-horse logo and signature orange boxes shown in varying forms. As an independent and revered brand, it is good to see that the descendants of the Hermes family continue to carry-on in the family name.

Just like the reputation and image of its over 181-year-old history, Hermes still operates under the principle of quality craftsmanship. Each Hermes scarf, perfume, ties, jewelry, bags, and clothing products are a reflection of the artists and artisans who hand-created each collection piece.

In addition to its iconic Hermes scarves, the modern and innovative manufactured fashion line continues with the following worldwide fashionable line:

The notable feature of early Hermes scarves is that they were so silky and thick that Audry Hepburn wore them in the Parisian rain. The celebs wearing scarves by Hermes today include leading names like Oprah Winfrey, Jessica Parker, and Mariah Carey.

It is reported that a scarf by Hermes of Paris takes 18 months to make. True classic Hermes scarves are so well-made that they are still in existence today but with a healthy price. Here are more interesting Hermes scarf facts:

2. It takes 250 Mulberry moths to acquire the silk to produce one scarf.

3. The hems of the Hermes scarves are of such hand-made quality that they never wear out.

5. Hermes scarves increase in value over the years.

Where Can I Purchase An Investment Scarf?

In other words, a Hermes of Paris scarf is more than just a high-quality clothing accessory, it is a smart investment. The authentic scarves increase in value by 6% each year because each one is so different and because of its exclusivity and its availability. If you are unable to attend the semi-annual Palais des Congress private Hermes scarf sale where scarves are 50% to 70% off, then own your Hermes scarf from an online authentic designer website.

Given the price of a one-of-a-kind Hermes silk scarf, the best retail market purchase is best obtained through authentic designer consignment stores. Whether a brick and mortar consignment shop or great online shopping centers like Luxury-Shops.com (LUX) who features a Hermes scarf category. Consignment shops can't afford to sell second hand Hermes scarves that are not authentic or they would soon be out of business.

Individuals in the fashion industry can easily recognize a true Hermes. There are two key insights into recognizing a fake Hermes scarf is in how it feels. A vintage Hermes scarf is silky soft, but a fake scarf contains Jacquard silk which is soft but is nothing to the touch like Hermes. Secondly, an authentic Hermes scarf will have the name of its artist somewhere on the scarf's surface.

Designer consignment websites include the leading designer's from A (Armani) to Z (Zac Posen). Your luxurious designer options can include items like Hermes originals to original runway fashion designer wear from last week. However, the rest of us must be able to authenticate a second hand Hermes scarf.

Who Gives Up a Hermes Scarf?

As valuable as a Hermes scarf or a Hermes anything is, why are we able to purchase the scarves on designer consignment websites? One reason could be that it is not uncommon for a man of a woman to own a Hermes scarf and bequeathed it to a family member throughout the years. Also, celebrities, politicians and other wealthy individuals often clean out their closet as a donation to a charity or to replace last year's Hermes scarf with the latest European style.

How Do I Buy Hermes?

What you must take notice of, however, is that copycats are everywhere, especially in the duplication of clothing and accessories in the designer fashion industry. LUX has proven its reliability and honesty in giving you a true designer, previously owned products. As in most authentic design consignment environments, the Hermes scarf owner would send it to the consignment location. The scarf is then photographed and listed on the website ready to sell and ship at half the sales price.

Owning a second hand Hermes scarf would be amazing and remember quite an investment. Remember, that Hermes would quite often re-release their popular scarf designs. But, there were rare scarves that were a once in a lifetime creation. As such, silk Hermes scarves are considered a specialized vintage clothing item that many individuals would love to acquire as a part of their rare designer collection.

It's All About How You Own It

A previously owned Hermes scarf can be worn to accent your quality designer clothing. You can wear a Hermes scarf that is tied to a quality handbag, it is large enough to serve as a belt or fancy head wraps. Larger sized Hermes scarves can also be worn as a unique top. To help you wear the best scarf and tie in the fashion industry you can download an instruction guide via two Hermes apps. Their Silk Knots is an instructional guide that teaches you how to tie their scarves in 24 varied ways. The Tie Break shows men how to loop the perfect tie. The Hermes app also includes fun games and more.

Why would a second hand Hermes Hermes silk scarf be a steal to own? For one reason, simply because it is from the House of Hermes and secondly, each silk scarf is considered to be a work of art that increases in value each year. Of interest, a Hermes classic silk scarf as an art form has been encased in glass frames and hung on the walls of the wealthy.

Treat Your Hermes With Care

Also, don't forget that when you purchase a previously owned Hermes scarf, care should be given to keep it looking authentic. For instance, do not wear your Hermes out in inclement weather. Do not puncture the Chinese silk with the use of pins, rings, or clips. When you remove your previously-owned Hermes scarf, don't just throw it down or crumble it away. The condition of your Hermes scarves is very important for its continued value effect.

Story of an Ultra Luxury Scarf by Hermes

As the owner of a Hermes scarf artwork, as well as wearing a vintage Hermes scarf is tantamount to owning a piece of history and art. It seems that Herme silk scarves each have their own story to tell. The storyline of each scarf features historical artisan history, European artwork, and fashion history. Hermes of Paris scarves is the symbol of fashionable scarves being worn today. Whether runway fresh or a valuable consignment piece, a Hermes scarf will always remain the pinnacle of ultra-scarfdom around the world.